Boba Fett’s overwhelming popularity has always surprised me, given the character’s minor role in the original Star Wars trilogy. Perhaps it’s the aura of mystery surrounding him that makes Fett such an appealing character.

Whatever the reason for his massive following, Adidas Originals and Star Wars have collaborated to create the ultimate tribute to fans of this enigmatic character: Boba Fett sneakers as they did with the Chewbacca Sneakers. While die-hard fans might be unhappy with the somewhat abstract design – especially the iconic Adidas stripes that don’t feature anywhere in Fett’s outfit – the sneakers definitely look like something the ill-fated bounty hunter might wear himself. The metallic green leather that makes up most of the shoe is burnished in places and greatly resembles Boba Fett’s deteriorating armor, complete with “shoulder guard” patches on the front of the shoes. Another nice touch: the heels are painted with orange stripes that match the original outfit’s helmet. The main appeal about these sneakers is that – unlike a lot of movie merchandise and memorabilia – they look like actual shoes rather than a costume. You can wear them to school or even to work (if you have that kind of workplace), and no one will point and laugh, and call you a Star Wars nerd, assuming they haven’t known you are already one. To the unknowing observer – who hasn’t examined them so closely as to see the “Boba Fett” tag printed on the shoe’s tongue – they would simply look like trendy, vaguely military-inspired kicks.

One thing that strikes me as being unexpectedly funny about these overall awesome sneakers is the packaging. Normally, shoes come in shoeboxes. This is something that holds true from cheap Wal-Mart loafers to expensive Gucci heels; trying on your new footwear before purchasing is an important part of shoe-shopping. These shoes, however, are apparently being marketed as hardcore collectibles rather than nerdy fashion, since they come sealed in a plastic blister pack rather than a conventional shoebox. 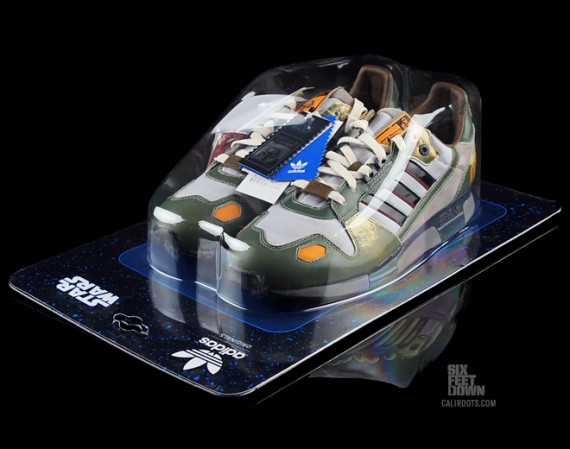 Odd packaging aside, these are probably among the most interesting casual-nerdy shoes you’ll ever come across. The design is tasteful and charming, and the sneakers appear to be made of high-quality materials. Just make sure to watch out for holes in the ground while wearing them! Boba Fett may be a cool character, but you don’t want to mimic him and end up becoming a Sarlacc’s dinner.