Home Gadgets The Evilest Tin Tote in The Galaxy

Galactic dictator, tortured lover, Dark Lord of the Sith, terrible boss, crappy father: Darth Vader was a lot of things to a lot of people. Even a convenient carrying case. 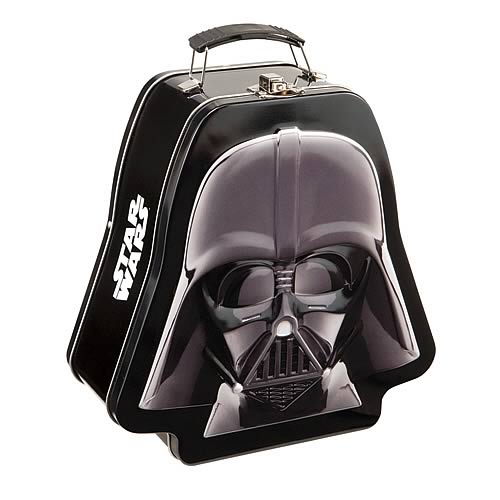 Darth Vader found redemption at the end of “Return of the Jedi,” but he still remains one of pop culture’s greatest villains. With his deep voice, towering stature and iconic black armor, he’s the man to beat when it comes to all things evil and dark. There’s no better way to celebrate his sinister legacy than carrying around a tin box embossed with his face. Vandor LCC has made that dream a reality. Their Star Wars Darth Vader Embossed Tin Tote captures the shiny black power and deep, angular glory of the universe’s greatest overlord in handy tote form. For$9.99 you can put your lightsaber, Star Wars figures, Death Star plans or even your lunch in this handsome case and be confident that none but the most foolhardy would ever dare open it under Vader’s malevolent gaze.

Shaped exactly like Vader’s head, the Darth Vader Tin Tote makes a unique statement about your love for one of the greatest characters in the greatest Sci-Fi series of all time. Whether you’re carrying it down the street by its collapsible handle or proudly displaying it alongside your Original Trilogy DVDs, this tin box is a must have for any serious student of the Dark Side. Darth Vader may not have had any pockets in his armor, but that doesn’t mean you need to leave your stuff at home. And should some fool question your taste in metal totes, just slap a Force Choke on him. That’s what Vader would do.