There are a few things that go hand in hand with Christmas. One of them, and maybe the most important thing in a time of celebrating not just the coming together of the family but also the obsession with TV shows, Movies, and Video Games, is wearing some cool ugly Christmas sweaters to show your Christmas spirit. Nothing conveys the true spirit of the holidays and saying I love you to family members than having these lovable Dr. Who characters, whose catchphrase is “exterminate”, embroidered on your Christmas sweater. Available for $45.95.

Dark Stripe Of The Force Sweater A lot of people get moody and angry during the holidays, and for good reason. Seeing the family for a few days with no escape can help elevate the dark feelings brewing inside you. No one portrays the angry man who took it a step too far than Anakin Skywalker, AKA Darth Vader. Available for  $56.00 – $60.00. Mario and a big ape on a sweater? Sign me up. But seriously, the colors, the levels, and the angry ape, not to mention the nostalgia this touches, makes this one of those Christmas sweaters that actually makes other people envious of the one wearing it. Find it here. So much green! So much blonde! This Street Fighter sweater is more than just a commercial for video game violence, although having a lot of KOs on it does make you feel like you’re in front of the screen. But it has reindeer and trees and snowflakes. It’s geekiness with the holiday spirit in one perfect combination. Of all the things cousin Eddie says in the movie Vacation, his RV line, which he got while giving his house for it, is probably the most memorable. Available $51.95 There’s a lot more going on here besides the couple sweater thing. It’s not just the perfect blend of red and green that goes well with the holiday. It’s the fact that Darth Vader is the Stormtrooper’s boss. And who is wearing the Darth Vader sweater? ‘Nough said. Available for $49.99. No, this isn’t a phone booth or an elevator. It’s the TARDIS, which there’s nothing quite like it, and no good way to describe it. It takes the Doctor away, more or less, through time and space. Something that comes in handy through endless holiday weekends with the family. Available for $45.95. By the time Christmas rolls up, Fallout fans will be done with the regular version of the game and modding the [email protected]#% out of it, like trying to go through the Massachusetts wasteland as a Deathclaw packing energy rifles or something like that. The sweater might have a warning on it, but it’s not really nuclear, don’t worry. Buy it here. For some people, the console war is a very real thing; something they live through every day. Not just Sony and Microsoft employees. Some people really take this thing seriously, and for good reason. If you love the PS, why not show the world how much you love it? You can buy it here. A prettier version of the same thing from above, more or less. The blue is better, and for some reason, the button color combination works more than the logo. Could make a nice couple thing as well. This cool ugly Christmas sweater is available for purchase here. Few things scream 80’s as a four-color CGA screen, and this white AT-AT strutting slowly with a black background doesn’t just take you back to the 1980s and the Star Wars films of that decade (V & VI), but also reminds you of all the great games you played back then. To me, it’s Karateka that first jumps to mind. Available for $56-$60. Darth Vader doesn’t need to be pretty (well, he isn’t) or on a pretty sweater to be awesome. Black on red speaks volumes for your intentions in life and the face/mask of the greatest Sith of them all completes the task of showing how you feel about Christmas. Available for $40-$48. Optimus Prime loves human beings so much he’s willing to put a custom made Christmas hat on his head, just so he can assimilate. I wonder where the hat goes when he transforms into the truck. You can buy this neatly ugly Christmas sweater here. Video game and childhood TV show references never get old. So having the coolest turtles to ever walk the face of the fictional earth, with the pizza slices Michelangelo loves so much, makes a perfect treat and wearable item for fans of the fellas, even if Splinter is nowhere to be found. The Ninja Turtles ugly Christmas sweater is available on amazon. The ultimate arcade experience is Space Invaders. Nothing beats it, not even Pac-Man, regardless of what people will tell you. This might be a violent message – kill the invading aliens instead of welcoming them with open arms, but we all saw Mars Attacks! and we know they’re not to be trusted. If you like this cool space invaders ugly Christmas sweater you can buy it here. The North of Westeros is a cold, depressing place. Oh, and it’s cold. That’s why Northerners in A Song of Ice and Fire (Game of Thrones to those who don’t like reading books) are so grim all the time. But their cool saying works wonderfully outside the fictional world or even winter as well. Buy it here. Zombies aren’t pretty creatures, so why make the sweater they’re on nice to look at, huh? The biggest offense of this sweater isn’t the zombies. It’s the insult being thrown in the faces of the color blind. You can find this cool sweater here. Oh man, is this an ugly one! But it’s so ugly that you don’t have to be an 80’s cartoons fan to appreciate it’s awesomeness and perfection for Christmas time. And the Thundercats logo, very similar to the Penn State Nittany Lions one, is one of the coolest things on the face of this planet. Available for $35-$41 One thing I never understood about the He-Man She-Ra universe. For some reason, every feat of power seemed incredibly difficult for He-Man. For She-ra? Easy, like it’s nothing. As a male in a female world looking for equality, that really got on my nerves. But they do look great together. Available for $35 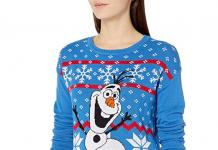 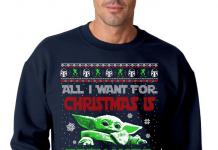