ASUS and Lamborghini have collaborated to create an external HDD that, to be perfectly commending, resembles a Lamborghini vehicle.

ASUS is already known for making elite computers and computer peripherals (and semi-decent cell phones). A friend of mine has an ASUS gaming laptop that he is very pleased with, and can run Starcraft 2 in Ultra mode. Computer sites all examine ASUS peripherals closely and have a general idea that they’re going to get a quality product.

Similarly, Lamborghini makes luxury cars. Many a career goal has a Lamborghini involved. So when I first looked at this hard drive, I was a bit skeptical. 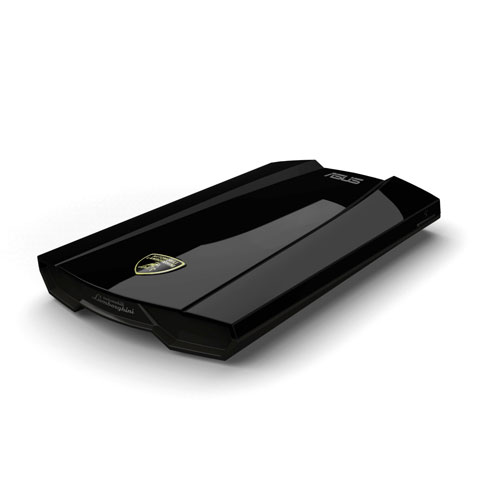 The hard drive itself is standard. It has 750GB of storage, which is somewhat mediocre given today’s 1TB standard. Also, it has USB 3.0 capabilities, which is a small plus. The only differentiation points are its design and the FlexSave software. I like to think users of computers know how to drag and drop, so the whole FlexSave thing seems like a bit of hogwash to me. Perhaps if it’s capable of auto-synchronization, I’d give it a few points.

The design is quite nice though. It definitely emits a Lamborghini vibe, given the bezel and shape. I’m a bit disappointed that it only comes in black and white colors. The classic Lamborghini would be a red one, which should definitely have been included. I’d have preferred a green and yellow one too, but the red is an essential. If ASUS took this route, perhaps the external HDD could become a collector’s item, which I think would be a legitimate strategy for it. Alright, fine I sound a bit hard on it. I’ve been told that if I have nothing nice to say, that I shouldn’t say it at all! Well, I’d still say it’s a standard HDD and has a very fascinating design, but I think it has plenty of room for improvement.  I think that its specs need to be stepped up a whole lot, especially with the “elite” Lamborghini image to keep up.

If you’re looking for some cool external HDDs, check out the Iomega eGo portable hard drive or the custom PS3 external HDD enclosure.