If you have a sweet tooth and were looking for new ways to appease your taste buds, you really should check out these cool GummyDevils. A GummyDevil from What the Devil is the world’s largest Gummy Bear and each one is equivalent to the size of 1,400 regular sized Gummy Bears. They also come with loads of calories and if you eat one of the GummyDevils, you would be gaining 12,600 calories! Each GummyDevil measures 9 inches and since in life size isn’t everything, he proves to other size-conscious people that its is the taste that matters the most!

There are several cool flavors to choose from and the 9 that are mentioned are Red Cherry, Blue Raspberry, Orange, Green Apple, Pineapple, Cola, Grape, Lemon and Pink Bubblegum. There are also other GummyDevils which measure 4 inches and are tasty too and easier to swallow down. They cost less, but are just as fun. If you want the 9-inch monsters, you would have to shell out $29.97. I would say, no one can resist the temptations of these cool GummyDevils and they were even featured on UK’s leading chat show “Friday Night with Jonathan Ross”!If you want more geeky stuff to eat, check out the Rubik’s Cube Cake and the Gingerbread Pacman, which are beyond delicious as well! 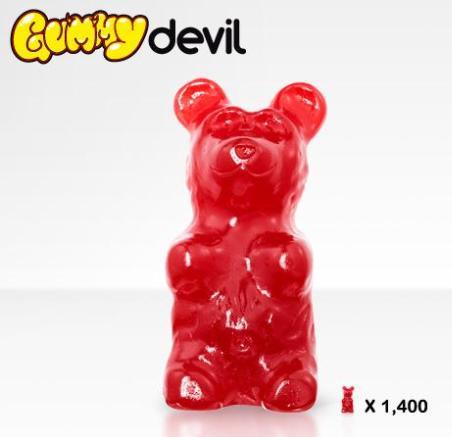