Rubik’s Cube originally developed by Hungarian sculptor and professor of architecture Erno Rubik in the year 1974, as the famous 3-D mechanical puzzle which on January 2009 became the world’s top selling puzzle and is also considered to be the world’s best selling toy. In a classic Rubik’s cube, there are six faces covered by 9 stickers among six solid colors which are white, red, blue, orange, green and yellow. But doesn’t this Rubik’s cube look a bit different? 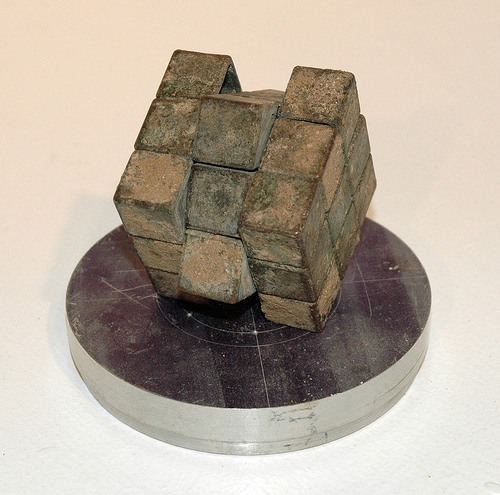 This one is probably not for solving but is a masterpiece of sculptor art made by Marshall Astor – Food Pornographer. This has been hand cast in white bronze in such a way which makes it have an unstable and rough surface although it has even shrunk. After the pieces were cast in bronze and then assembled, the cube was buried in a mixture consisting of dirt, various acids and salts inside of a hand made birch box which had been specially designed to keep the environment moist and humid but it also allowed some passage of air and water for about a year. Marshall Astor completed this piece during his collage years in 1999. This is creativity at its height and really has mesmerized me.