‘Until death do you part’ takes on an entirely new meaning when you are surrounded by horror movie characters and coffins, or married by a zombie!

I love Halloween, it is a night where I get to dress up and eat candy. (It is also a dentist’s favorite holiday, but that is a story for another time!) Seriously, what is so bad about creating the perfect costume and going to a party where you see friends dressed up as crazy things?!?! With so many people in love with this crazy holiday, it is not surprising that many couples, especially during the month of October, opt to have a Halloween-themed wedding! I mean, there are seasonal-themed weddings, vacation-themed weddings, and even comic book-themed weddings, so why not Halloween themed? Of course, feelings like “love” and “commitment” don’t necessarily pop out at you when you think Halloween, but some couples definitely know how to do it right – mixing the right amount of macabre with the lovey-dovey tenets of getting married. Here are some examples of Halloween weddings done right, where “in sickness and in health” and “’til death do us part” take on completely new meanings in the wedding vows portion of the ceremony! 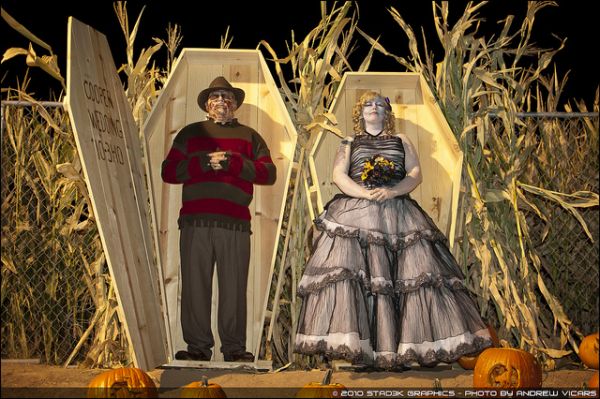 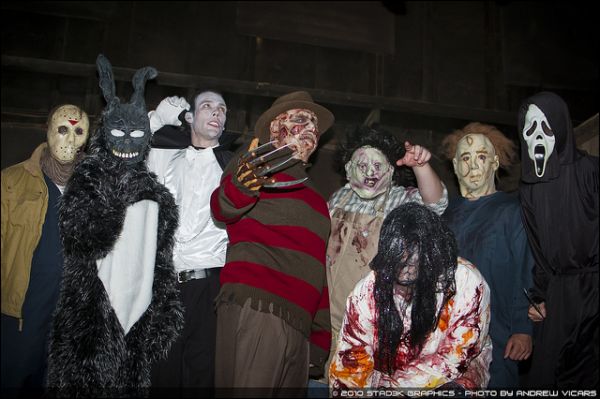 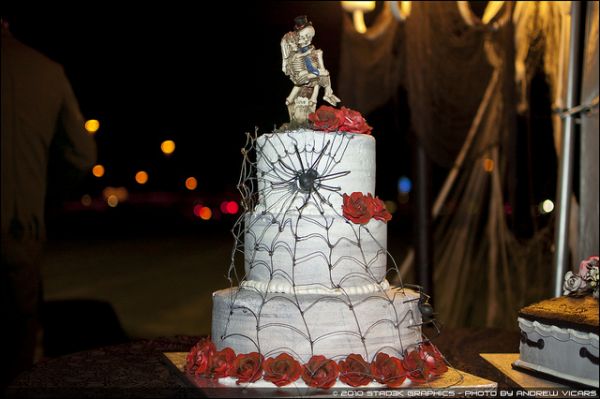 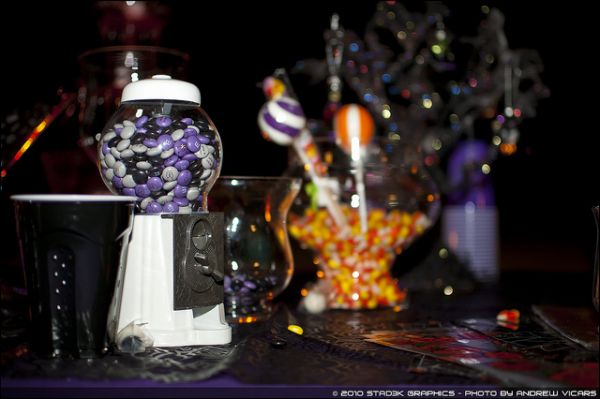 He’s Freddy Krueger, she’s a corpse bride, and his groomsmen are dressed up as famous movie monsters we all know and hate (or adore). The cake is horrifically stunning, and there was a funky dessert table to match the theme of the wedding. Hello big bowl of candy corn!! 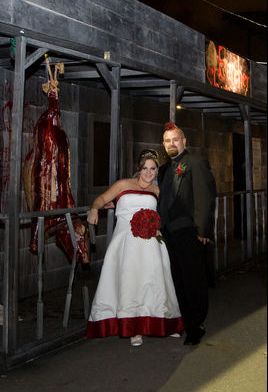 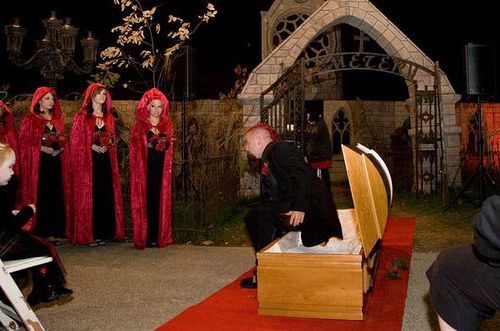 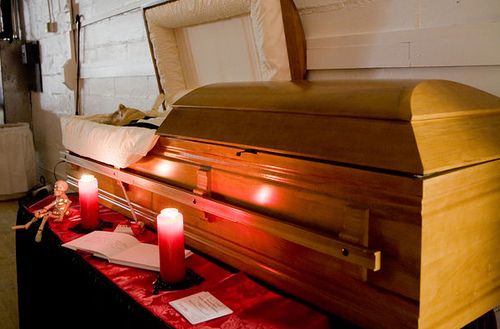 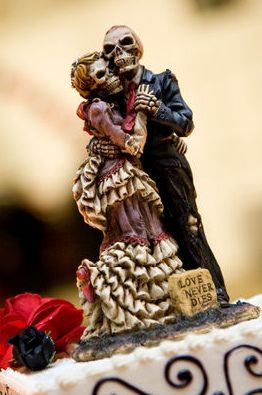 These two hippy-dippy lovebirds met while working at the “7 Floors of Hell” haunted house in Ohio, so it made sense that this location, graveyard included, is where they opted to get married. The groom arrived in style – in a coffin carried by his pallbea… I mean groomsmen. Meanwhile, the bridesmaids looked on in black dresses with full length red cloaks. At the sign in table was another coffin with a (fake) dead body! But possibly one of the coolest parts of the wedding was the cake topper, which featured skeletons in a close embrace, with a sign that said “Love Never Dies.” Oh, I am tearing up! 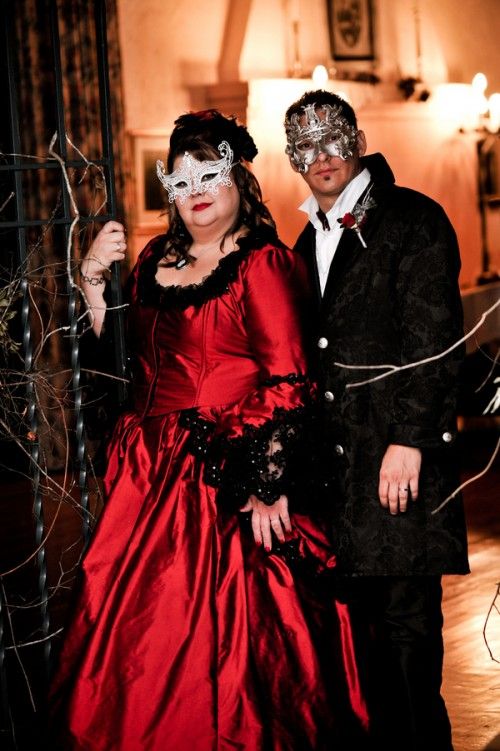 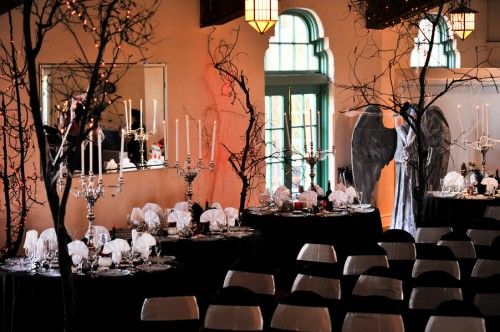 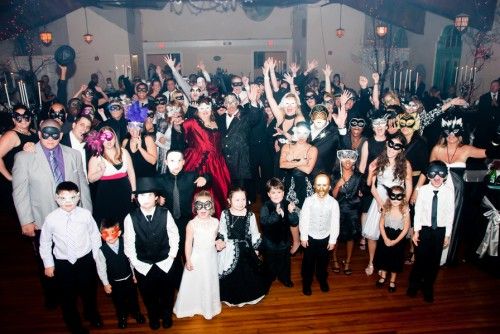 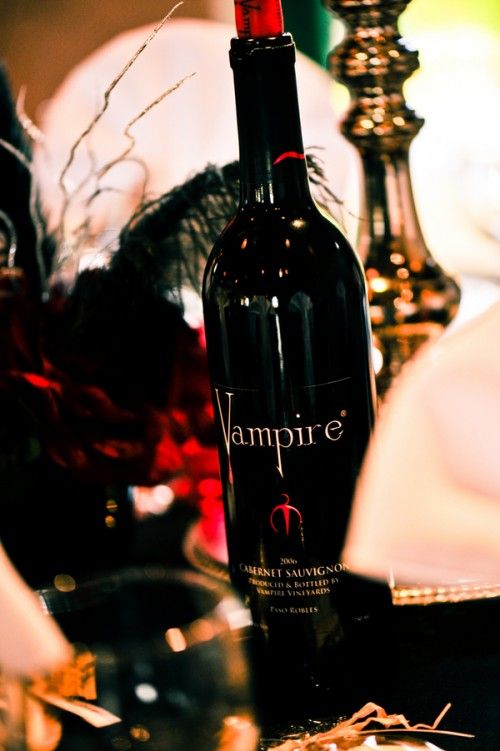 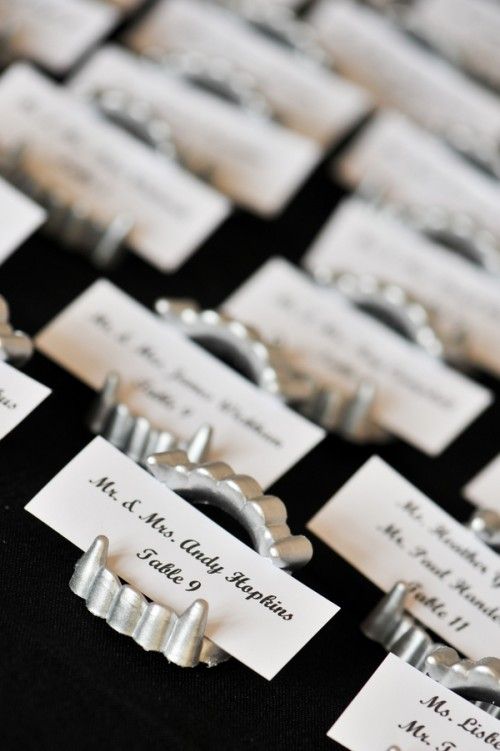 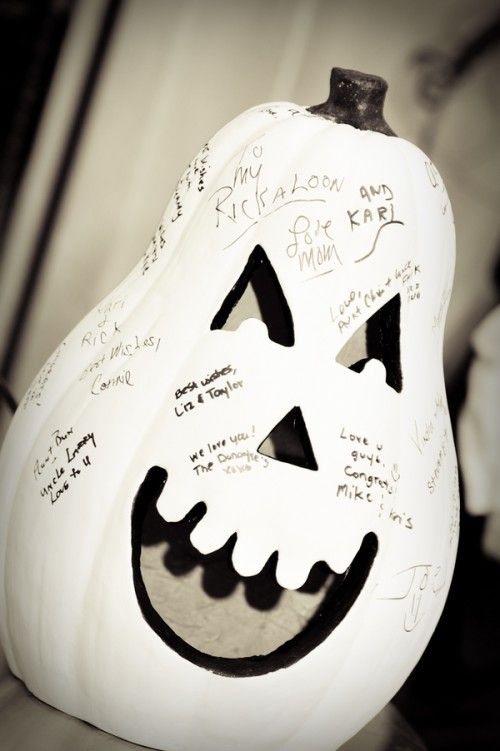 These two Halloween-loving lovebirds wanted to do an elegant soiree with a Halloween theme that was not tacky. They took inspiration from the classic Broadway hit, “Phantom of the Opera” as well as old-school vampire movies when creating their spooky wedding. Guests wore masks, drank Vampire wine, and had fake vampire teeth holding the place cards. At the end of the night, rather than signing a guestbook, guests were invited to sign a while ceramic jack-o-lantern. 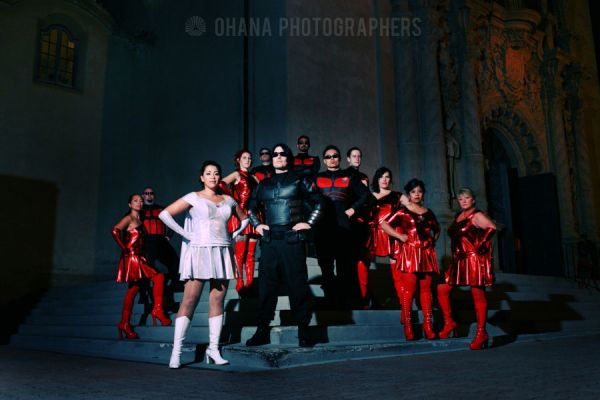 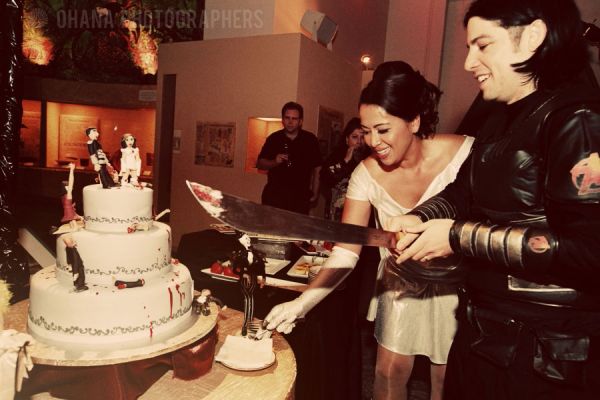 While their ceremony was pretty tradition, the reception was anything but! This couple did not go for the scary part of Halloween, but rather the dress-up aspect. In fact, when the wedding party entered the reception, they were no longer wearing their dresses and tuxes, but superhero costumes! Guests were invited to wear masks and drink from cocktail jars covered in biohazard stickers. And for the cake cutting ceremony, it was only logical that the bride and groom cut the cake with a machete! 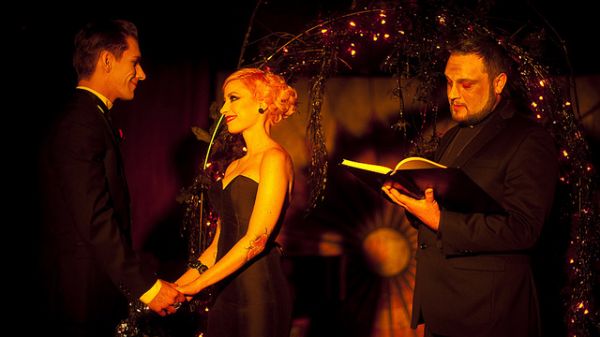 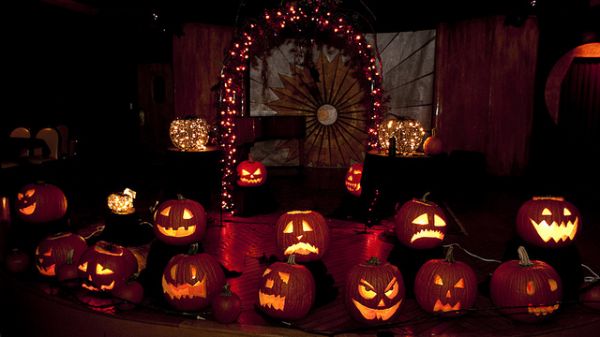 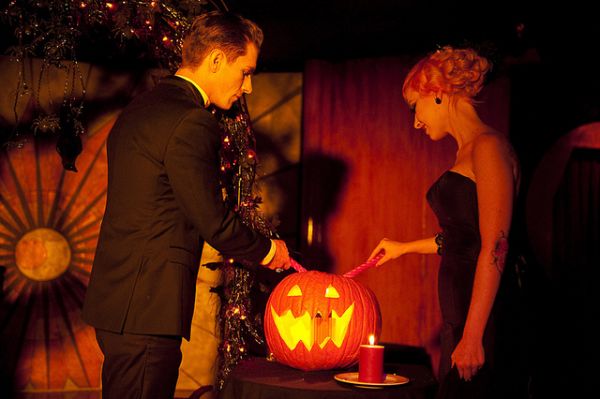 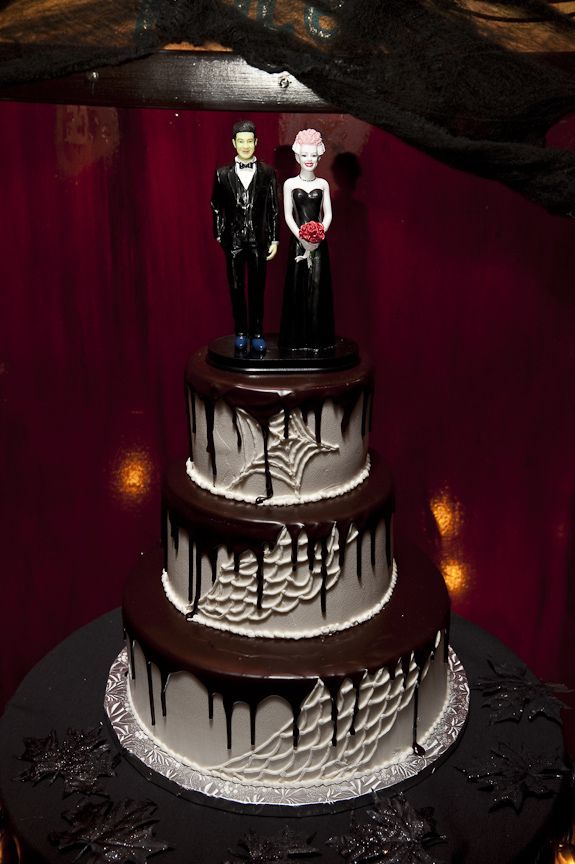 Wearing all black, married by a zombie priest, and surrounded by carved pumpkins, this was an elegant wedding. Rather than the traditional unity candle most couples light during the wedding, these two crazy kids opted to light a jack-o-lantern together! And who doesn’t love that cake! 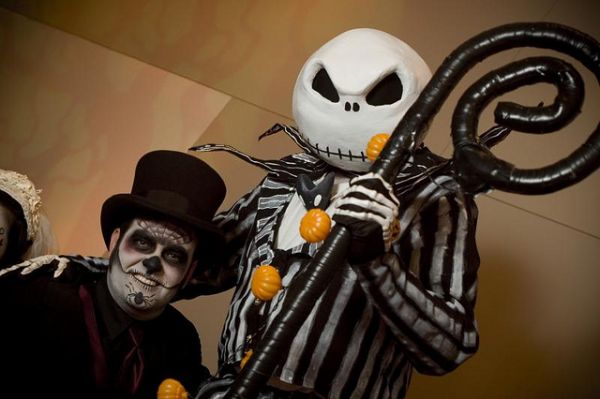 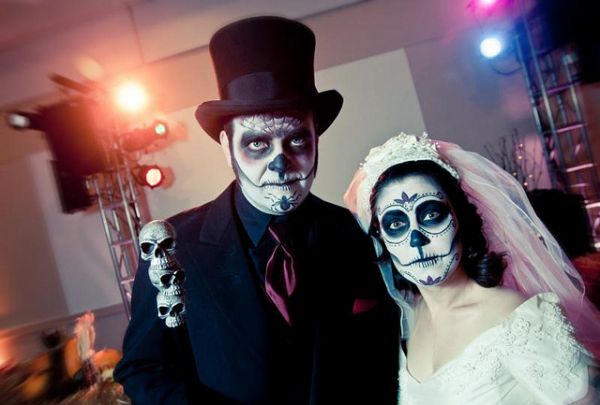 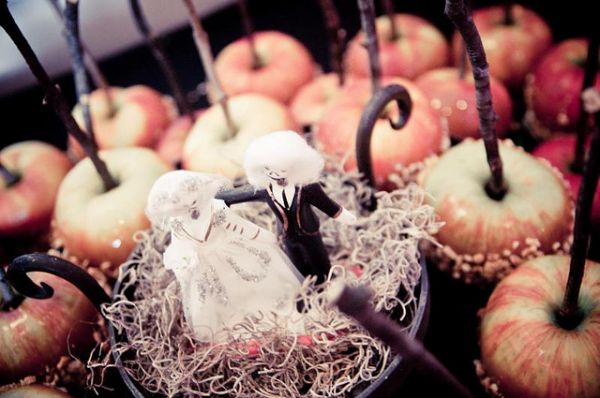 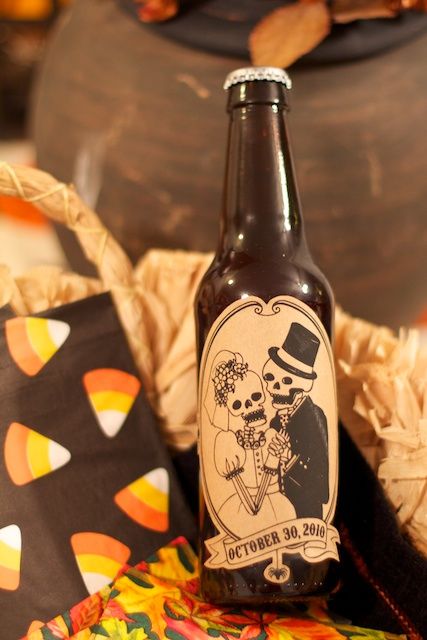 Last but not least, there was Kelly and Justin, two kooky characters that can’t get enough of Halloween that they invited the master of Halloween, Jack Skellington, to join in on the festivities! With painted faces during the reception party and a table lined with caramel apples and candy, this was a Halloween party for the record books. And who doesn’t love the bottles of homebrew with a picture of two skeletons and the date of the wedding?!

So, do you have any ideas for your wedding?!