Xbox 360 fans are best known for their love of first-person shooters. A modded 360 controller with real bullets could be a match made in heaven for those fans.

Of all the video game controllers this generation the Xbox 360 controller is the most frequently modded. Search Google and you’ll be overwhelmed with all of the unique designs and improved functionality. There is no end to the number of mods that will add glowing LEDs to your beloved 360 controller. Forget all of that mess because UK based Rogue Controllers is locked and loaded with some of the most original mods designs around. The “Sniper Wrap” is a genuine 360 S controller with some serious ammunition. The D-pad, guide button and face buttons have all been replaced with actual Winchester shells. The D-pad comes from a spent 12-guage shotgun shell. The guide button is made from the shell of a sniper bullet. For additional variety the face buttons have been taken from rare .40-caliber S&W Winchester bullets. This modded controller’s name is taken directly from the camouflage coloring used to create the shell. The custom shell makes the entire controller appear to have been made from fabric instead of plastic. If you want to own this sleek little controller it will cost you just over $100. For do-it-yourself gamer geeks who prefer to get down and dirty Rogue Controllers also sells custom assembly kits. The kit includes a choice of either nickel Winchester or Remington 12-gauge shotgun shells for the D-pad. 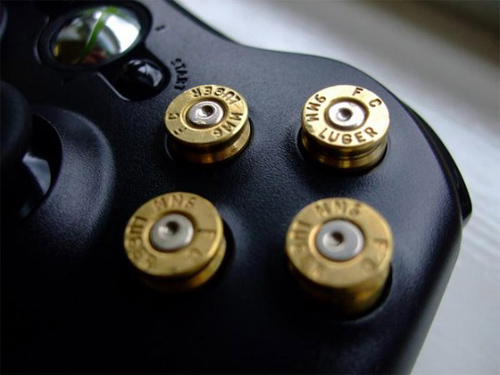 The shells for the face buttons are made from 9 mm Luger bullets. Unfortunately, this kit does not include a sniper shell for the guide button. Regardless, this is still one hell of a unique controller mod and the kit itself costs less than $25 dollars.

Unlike the many mods being offered by other companies Rogue Controllers’ mods are purely aesthetic. Replacing the 360 controller’s D-pad with a bullet might be the most impractical thing ever but it still looks cool. You also may not win any additional matches against your friends in “Call of Duty” but they’ll still be impressed by these mods.