While the Xbox has largely been overtaken by its sleeker descendant, the Xbox 360, this incredible wooden sculpture reminds us of the golden days of Jet Set Radio Future and Halo.

The Xbox was a bit different from its competitors – while the PS2 was slim and sleek and the GameCube was tiny and, well, a cube, the Xbox was pretty bulky. It even gave birth to the popular phrase “XBOX HUGE,” referring to something that is ridiculously big. However, this sculpture by Ben Winfield reveals that the Xbox had quite the charming design – it was really an architectural beauty! As the wooden NES sculpture showed us, just about everything looks incredible when you make it out of wood. 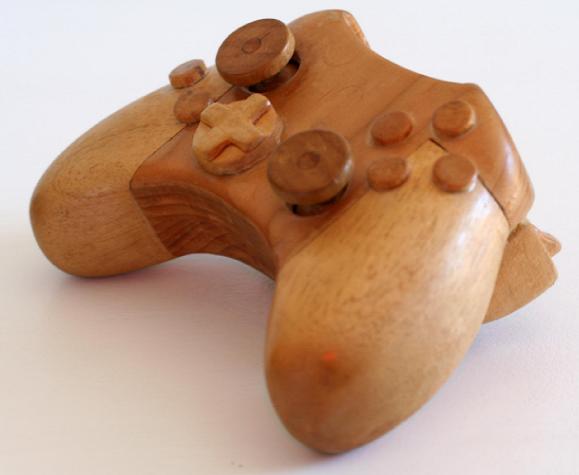 Curiously enough, the controller in this sculpture looks like a crossover between the Xbox’s controller and that of the Xbox 360. Best of both worlds – it’s certainly not the massive behemoth that we had to try to wrap our hands around while playing Halo. I think that hands-down, the best part of the controller is the fact that the analog sticks can be moved. That’s a great touch that plays on the idea of turning video games into art. From an artistic point of view, the combination of different types of wood on the controller also looks quite attractive. It brings depth and colour into what could’ve been a drab sculpture. Every detail is lovingly crafted, from the perfect little triggers and the bulky D-pad. While the logo in the middle has been omitted – along with the nameless black and white buttons – it saves the controller from being excessively branded and overly-detailed. The Xbox itself is perfectly rendered, from the vent-like ridges to the massive X on the top of the gaming system. Even the grooves on the console have been ported over to this wooden version. I’d love to see someone take this design and make it actually house an Xbox. Wood paneling is incredibly classy when combined with video games – just look at the legendary Atari console! Some other beautiful wooden designs include this playable 8-bit violin and this incredible replica of a Ferrari V8 engine.